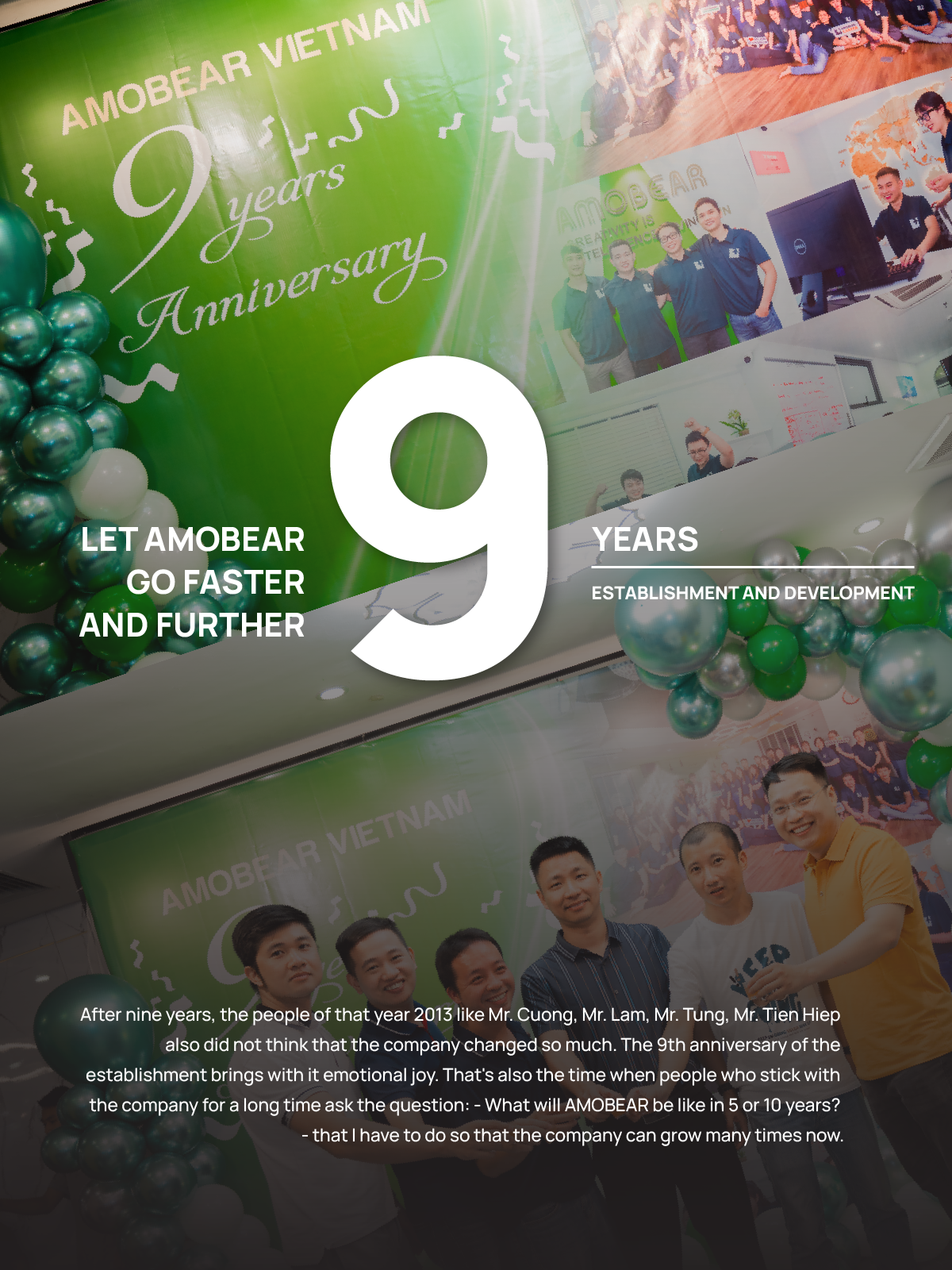 After nine years, the people of 2013 like Mr. Cuong, Mr. Lam, Mr. Tung, and Tien Hiep did not think that the company would change so much. The 9th anniversary of the establishment brings with it emotional joy. That is also the time when people who have been with the company for a long time ask the question: – What will AMOBEAR be like in 5 or 10 years? – that I have to do so that the company can develop many times more than it is now. 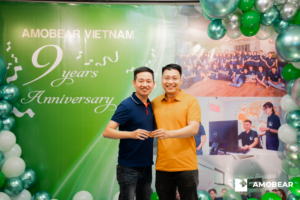 “Honestly, when he took his laptop to school to play games every Saturday afternoon after finishing half a day of work at VCCorp, he was passed by his seniors to the 4-storey house C3-08 Dinh Cong, at that time he was never there. Thinking that I will work here – because I was young at that time – I want to work where it’s building, it’s office, it’s lemongrass a little bit, give it Hawaii. After going to school for a few months, I was able to release the game Wolve Run with admod and push it to Black Berry’s Black Berry World store, earning several hundred dollars. Turning back and forth, how fate has pushed me to be 4 years of seniority at Amobear.” – Mr. Thanh Trung shared.

Anyone who has been at Amobear long enough has probably heard of Genghis Khan from the stories of CEO Nguyen Tuan.

Why from a small tribe caused the whole Eurasian continent to be conquered by Mongol horses, building a vast empire. Genghis Khan is the embodiment of the desires of his followers. Not just give them a vision of a world empire. He also met their need to be lifted out of poverty. Genghis Khan also did not forget to share livestock, clothing, food and acquired lands with others. Regardless of their social position. He always showed confidence to those he trusted the most. And constantly generously encouraging everyone to follow him. Clear rules, abundant rewards and achievements were the basic principles of his rule.

As a product company – completely different from outsourcing, there are many things to learn, tinker with, research and improve continuously.

To have a product that makes money, a game or an app that brings profits to the company is not a simple thing. Everything is rooted in man.

You don’t have to be observant to see such individuals in a group, people who always go to work early like Minh Tri, people who work on coding all weekend like Dinh Khanh – Hoang Ngoc or Tuyen, who are good people. come early to peel fruit; proactively clean even though it’s not their day of duty like Bao Anh, Ngoc Duy, My Ha who when the company has an event always contribute to the common work like Le, Phuong, Thanh Thanh – Hong Anh…

Therefore, people with a good foundation of skills & ethical attitudes are always an important link of the company and are worth fostering for higher positions later. Because they always spread positive energy to the people around them, they are the ones who choose to contribute a part to the team instead of complaining about being busy or being late or making up countless excuses to refuse.

Almost everyone goes to work for the purpose of making money, the more the better. Is money important, if anyone says no, please try a few times to go to the hospital, if it’s light, a few bulbs will be heavy, then dozens of bulbs will fly by without insurance. Want to earn more, want higher income only by improving the quality and profit from the product. You want a high salary, a lot of bonuses at the end of the year but you don’t have the will to progress, you want to take Saturday and Sunday off, finish your work, always blame the company, in meetings, you often complain about bottles but do not accept the owner. Actively looking for solutions, not actively calling the other party into the same thought.

Leader or boss asked, reason A reason B, C, D, E…. n reasons. When you receive a few months’ salary at the end of next year, there are other positions with good business performance, the banh chung they receive is much more meat than you.

Big boat, big waves, when the company expands its force more and more, the pressure on every position from high to low will be more, which is salary, which is the 5-year 10-year orientation, which is the human resources. … billions of other expenses. If people don’t empathize and understand this, it will be difficult to stay together for a long time and achieve our goals. No one is born destined to be a winner, no one is born square, no one is born to be a leader, a technical director or a marketing director. .. 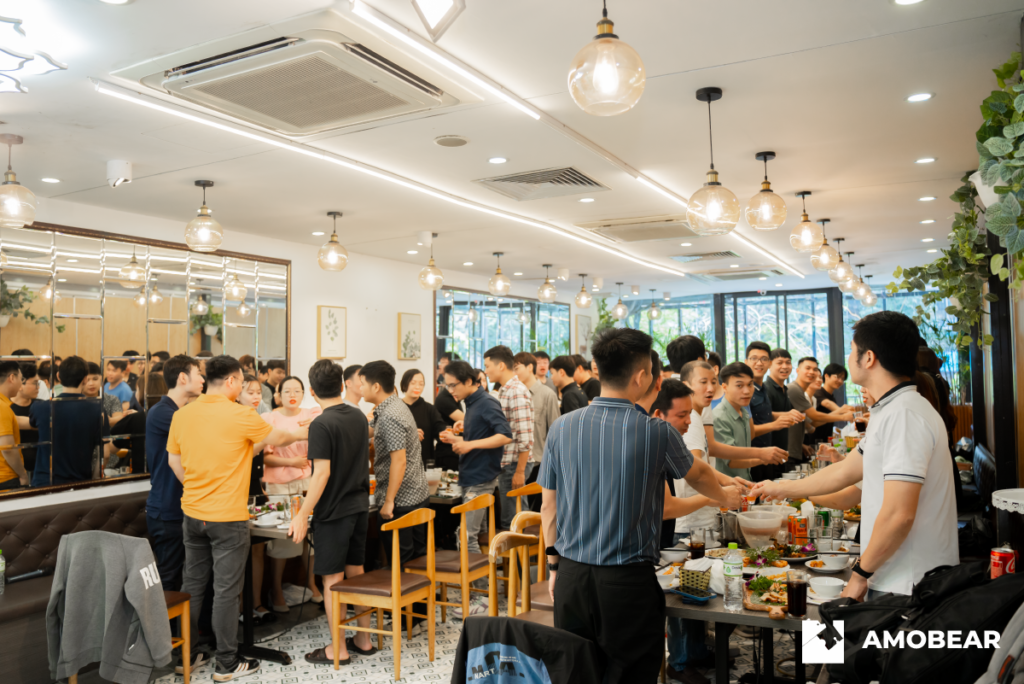 The reason Genghis Khan was able to achieve such resounding success is because of a process of training, learning and a strong will to overcome difficulties and challenges. So don’t think you can’t be successful. Let’s change little by little from today, from the way you talk to your colleagues, the way you solve problems. Progression & curiosity is the key for you to advance in your career.

In order to create world-class products, we ourselves have to change, each individual also needs to research many new technologies, techniques they have never applied, AI and web-app… how to run multi-network advertising reports, how to create trending videos, coordinate with the backend to deploy different features.

Capturing the policy, configuring the cash flow, exploring the AppStore market – to do so, you need fine products, in addition to features and features, you also need detailed localization..And to accomplish those further goals, the ambition is to increase. grow many times as the boss set out, we each need to do better than the present. Be stricter with yourself, keep a cool head and sanity – pragmatic and realistic. 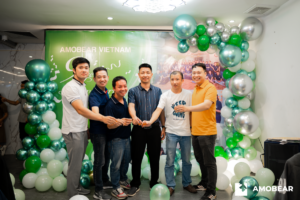 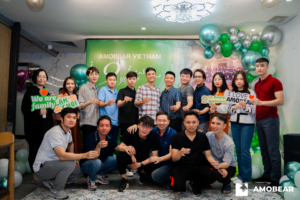 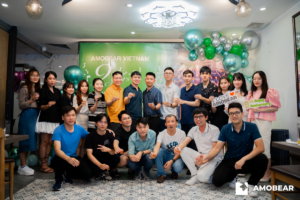 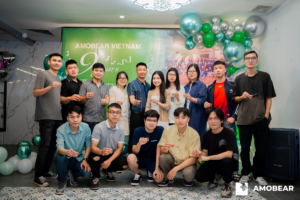 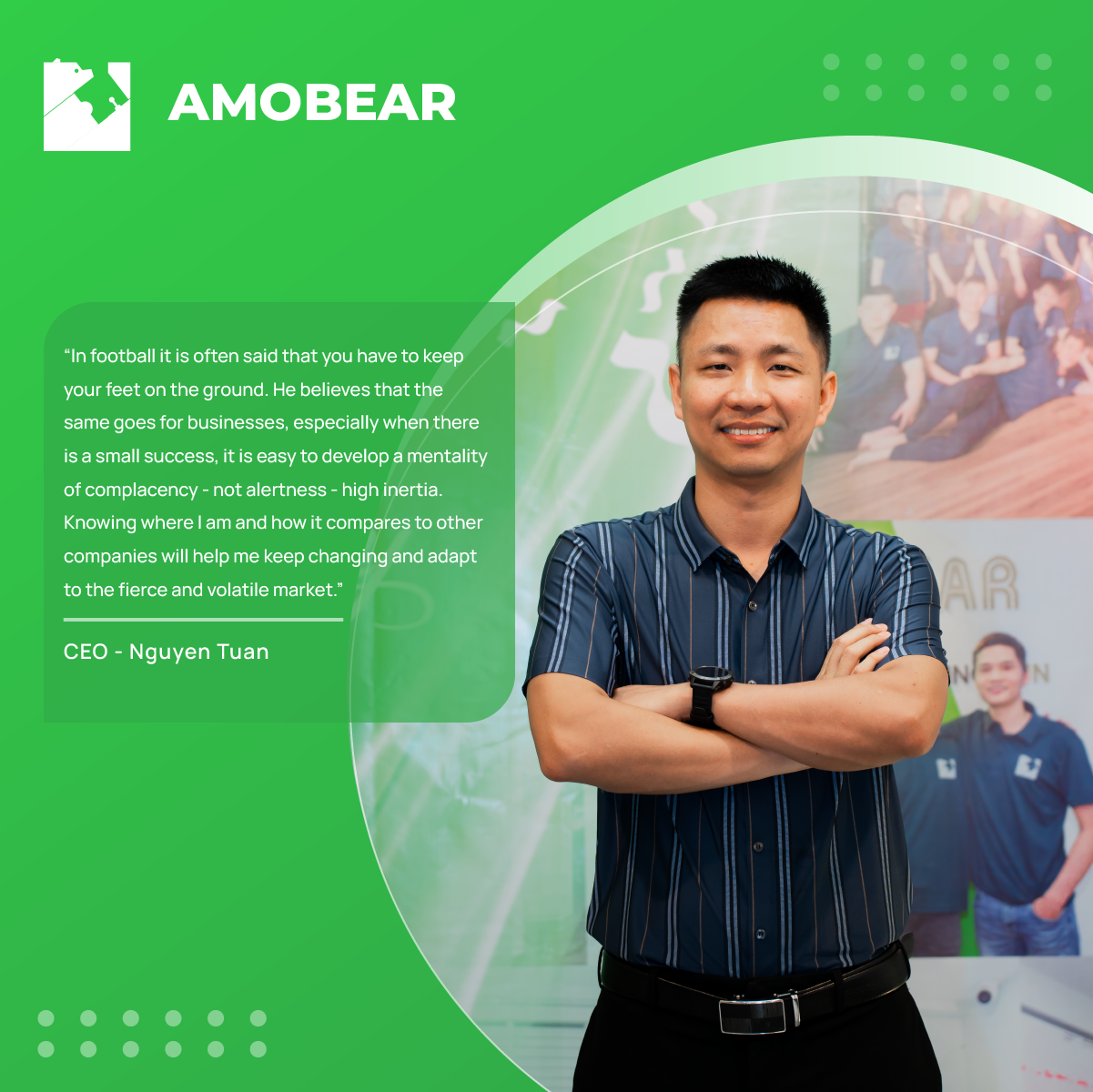 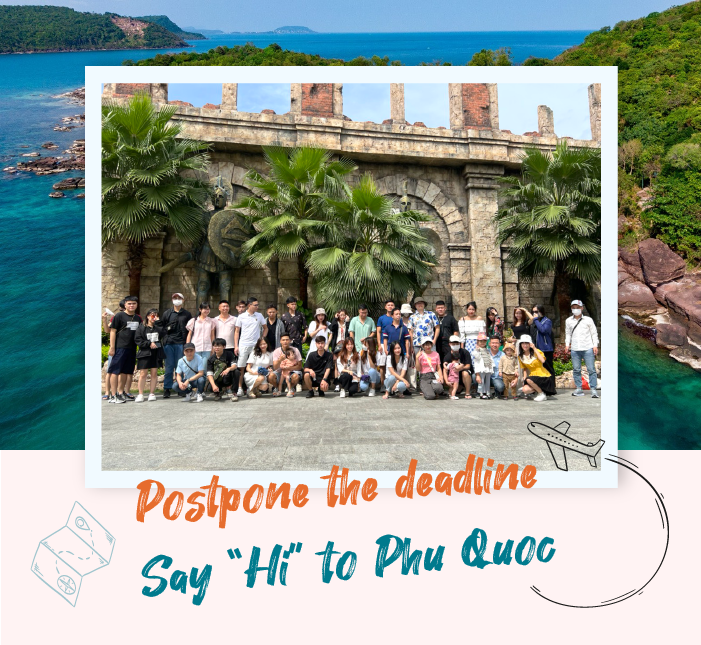 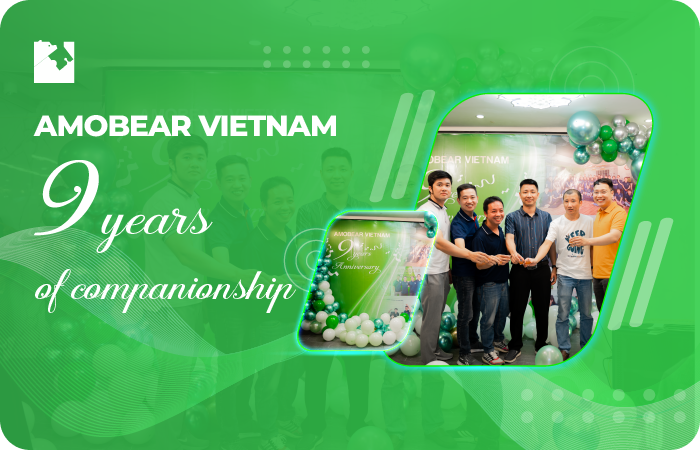 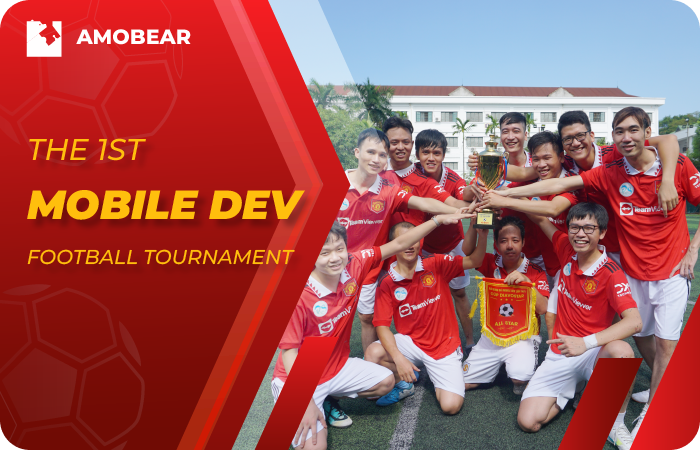 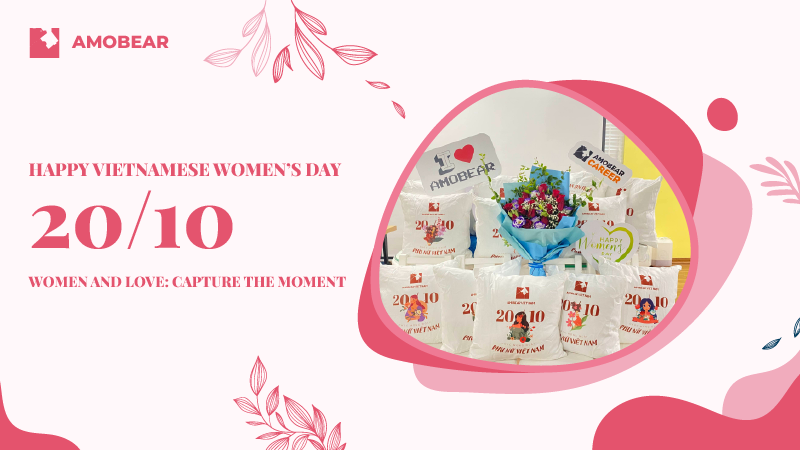 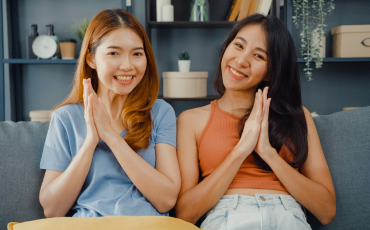